The project's objective is to create a 3D foot scanner. The scanner generates three-dimensional castings of shop visitors' feet and, using the specifications and characteristics of the foot, determines a comfort rating (fit rate) for each foot, proposing appropriate shoe models. The gadget is comprised of a platform with a graphic marker and four masts each equipped with a camera.

Compared to previous equivalent devices, this product is differentiated by the great precision of mathematical modeling simulating shoe wear, which allows for the determination of all leg parameters up to the knee. Following that, the online tool generates suggestions for the appropriate shoe size for dynamic situations (for proper load distribution when walking and playing sports).

Create a 3D TryFit foot scanner for shoe retailers as a side project.

The scanner had to be effective, unobtrusive, and ergonomic. At the customer's request, it was required to avoid superfluous features and draw inspiration from clean, basic shapes and lines. A critical objective was to minimize the case's weight while retaining its strength, as well as to preserve the design's accuracy in comparison to the previously designed metal version of the scanner. For transporting purposes, the construction should be foldable and compact. Antibacterial materials and surfaces must be resistant to treatment.

The Art Up team submitted many design concepts for the future product's casing.

Prior to drawing, we examined the customer's tasks and added our own to broaden the design's first "horizons" and think more generally. We were considering how to make the gadget more intuitive and appealing to the user, as well as how to make interaction with it more convenient. We attempted to develop a basic design, but in certain variations, we included details that would set it apart from competitors on the market. We offered a version with lighted tracks that provided feedback and allowed the gadget to "speak" with the user. WE drew many designs and mechanisms for the masts on which the cameras are mounted, attempting to create multiple appearances for them. 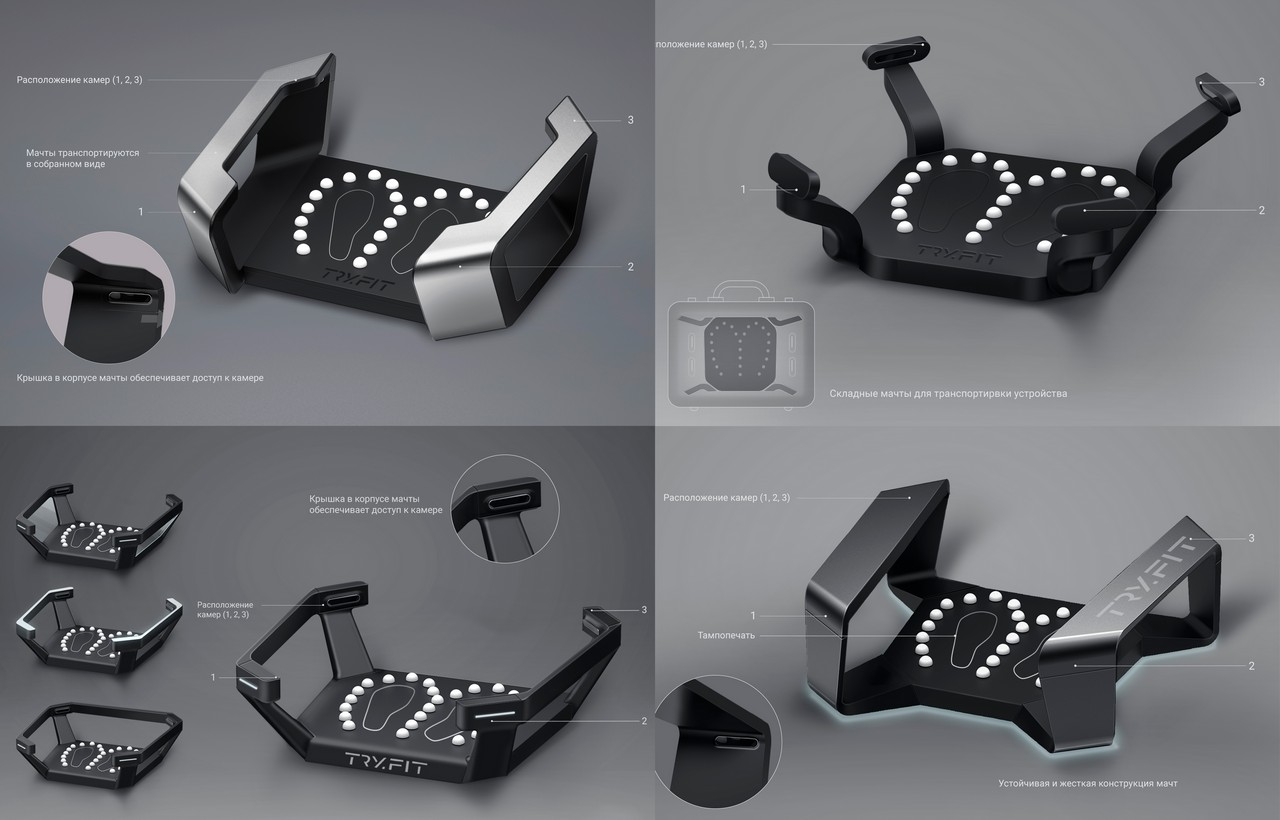 We completed an iteration on more sketching based on successful search sketching ideas, and we got to the point! A solution was found that satisfies the consumer almost fully. This drawing was created and went through the entire industrial design process (in the lower right corner). 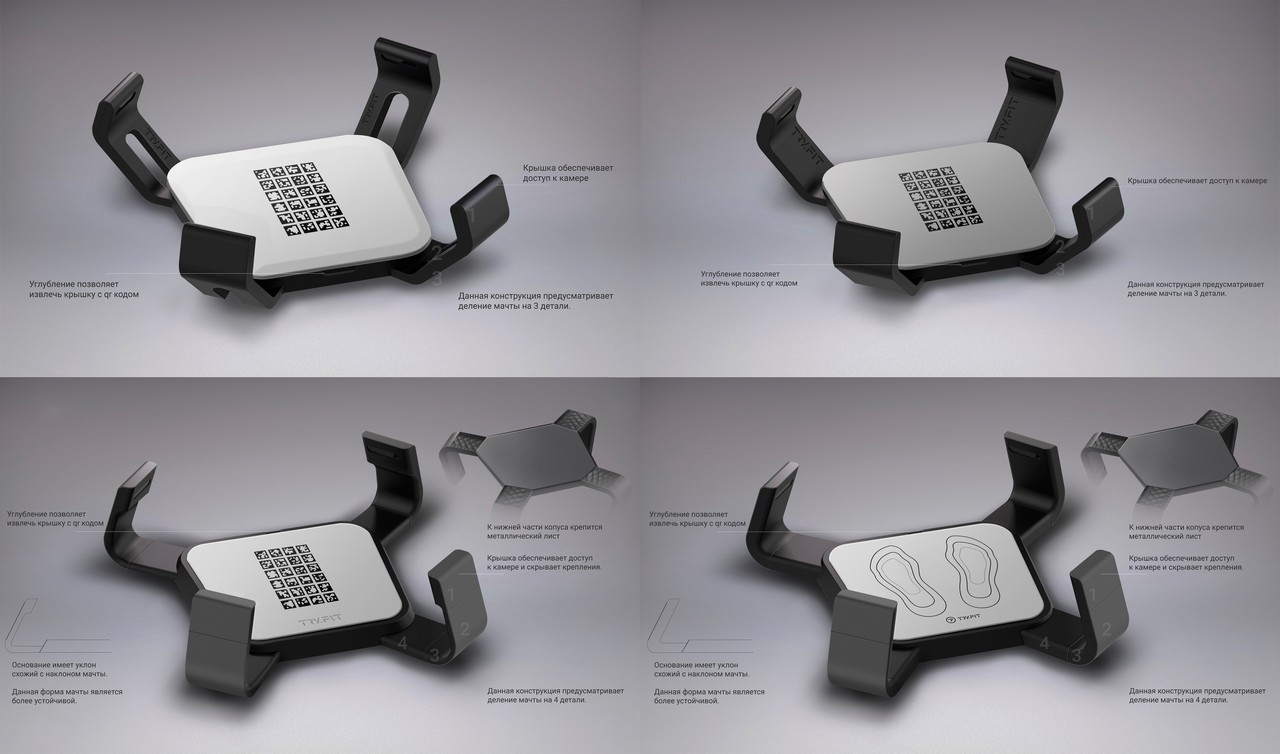 The gadget obtained clean forms with a harmonic arrangement of volumes as a consequence of a comprehensive sketching of the preferred choice. The aesthetic solution's minimalism and lack of frills allowed us to focus on the essence and usefulness. The TRYFIT scanner's minimalist style makes it suitable for establishments with a wide variety of interiors and colors.

Additionally, at this point, we estimated the least amount of components and sketchily installed hidden fasteners to obtain a minimalistic casing with strategically placed branding. 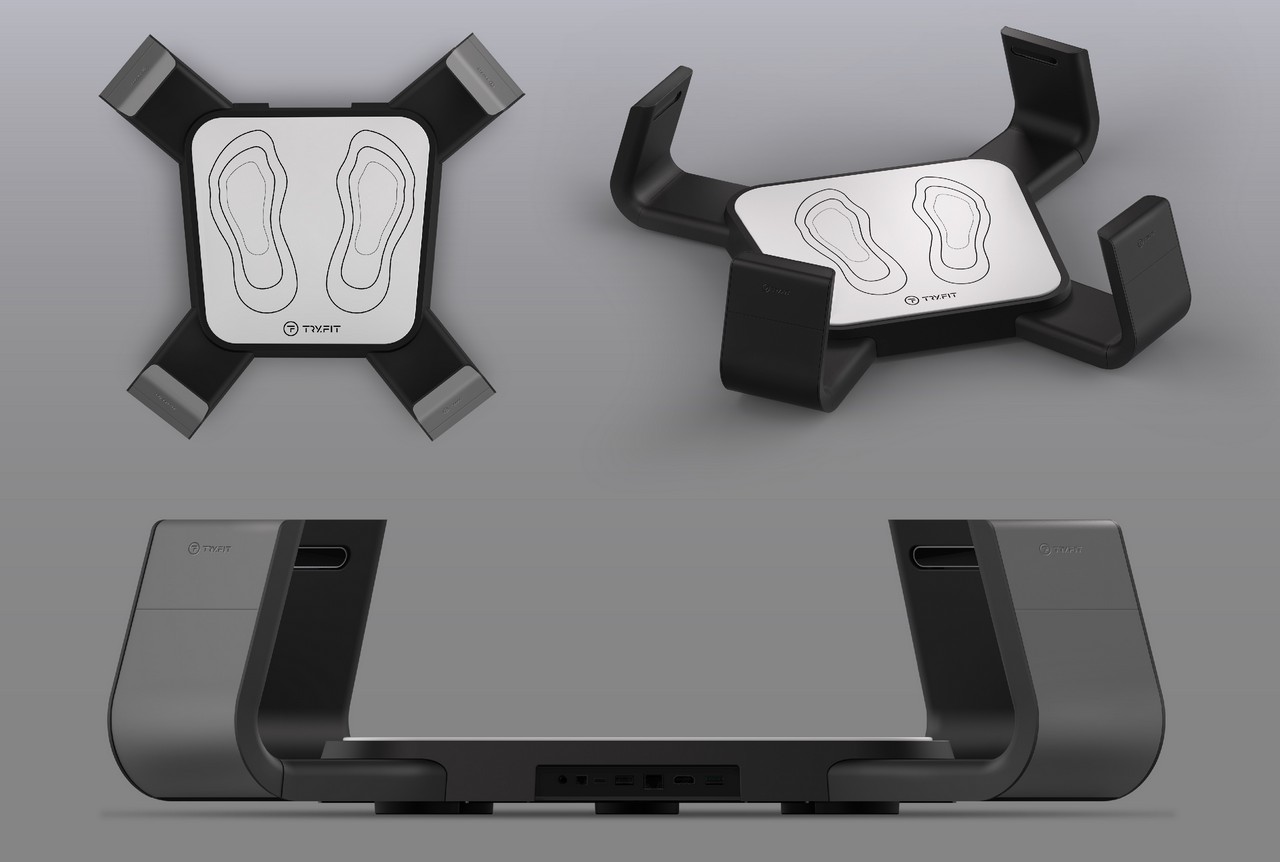 The case in its ultimate form.

The final form of the case satisfies the customer's broad aesthetic, functional, and design preferences. I t was vital to construct the scanner's masts in such a manner that the cameras contained within them were simple to install, operate, and manipulate. The design department met this challenge by proposing its own solution. This topic is discussed in further detail in the section on construction development.

We translated everything from the drawing to 3D modelling throughout the stage. Our designers established a general form for the device, specified all of the gadget's measurements, specified the case's thickness, and separated the structure into components. It was critical to maintain the client-specified location of the cameras, which is why the geometry of the masts was designed in relation to the heights and angles of the cameras in space.

A concept for a color solution.

Our team suggested color alternatives that were fairly conservative and rigorous in accordance with the customer's desire at the conclusion of the 3D modelling stage.   Additionally, placement choices and logo application technologies were suggested. 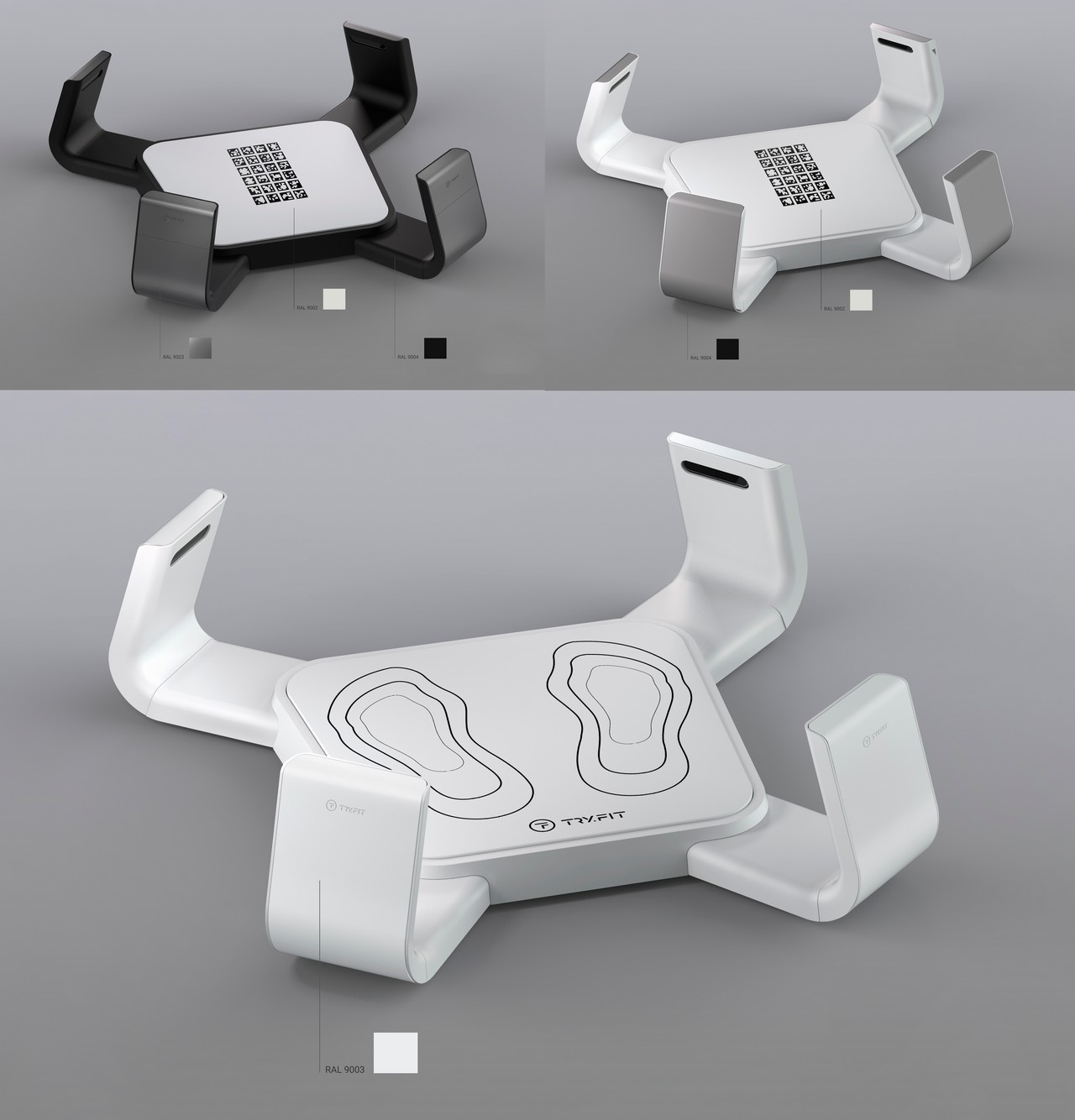 Later on, we decided to branch out from the gray-white color strategy and include vibrant choices. 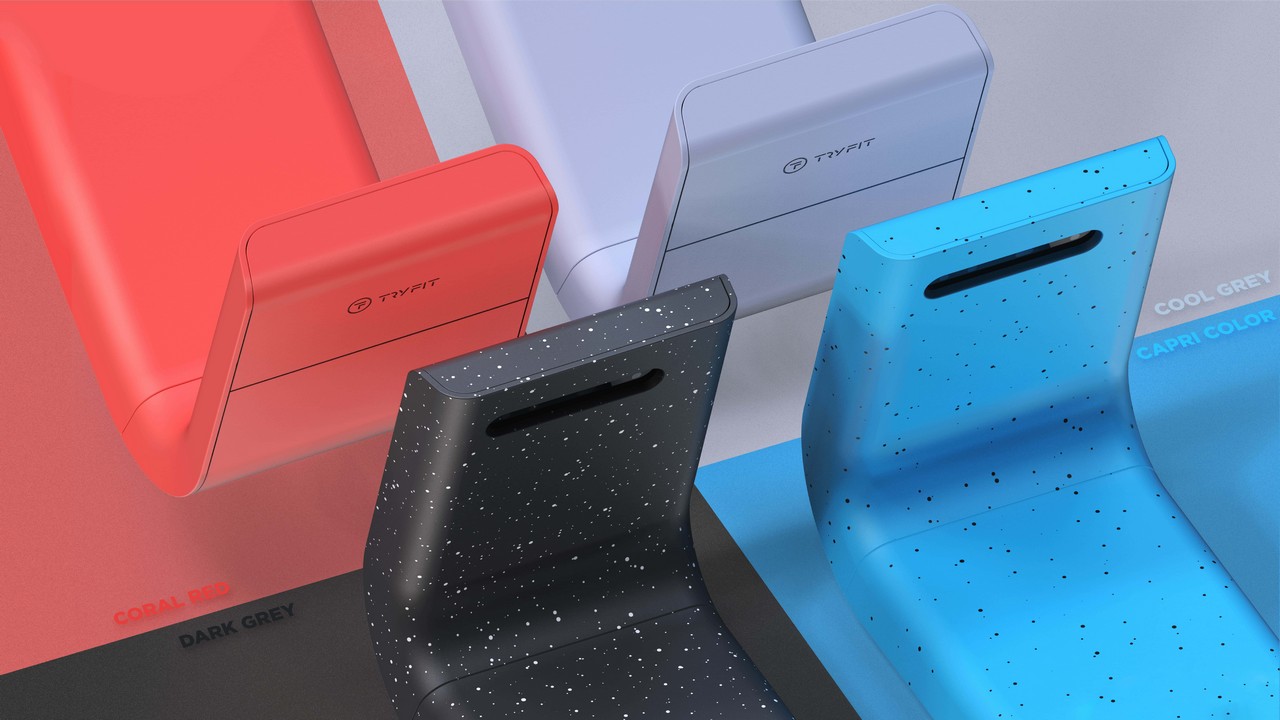 * Layout and part separation in engineering;

* Ensure that the structure of the housing is lightweight.

* Ensure that masts and their subassemblies' major components and fasteners are interchangeable.

* Secure four masts rigidly and reliably (the scanner must be capable of withstanding a weight of at least 200 kg. );

* Calculate and analyze the product's strength;

* Assemble injection-molded components prior to manufacturing;

* Assist in the product's manufacture.

The scanner is composed of a base housing that bears the majority of the weight and four identical masts in which scanning cameras are placed and precisely attached.

One of the primary objectives was to assure scanning accuracy, which required the development of a hull in which the masts remained fixed both throughout the scanning procedure and while a human stood on the scanner. Thus, the interior aluminum structure of the masts exhibits minimum deformation, preventing the cameras from being displaced from their "zero" locations. Plastic components are attached to the frame using latches.

The base's design incorporates five supports and stiffeners that are strategically placed to distribute the weight produced by a person equally throughout the body. To increase the structure's stiffness, a steel sheet is inserted in the base component, which also bears the load.

Each mast is equipped with a cover attached through a built-in loop and magnets for attachment. This is important to allow for fast mast maintenance.

The mast cover opens by rising and self-closing. 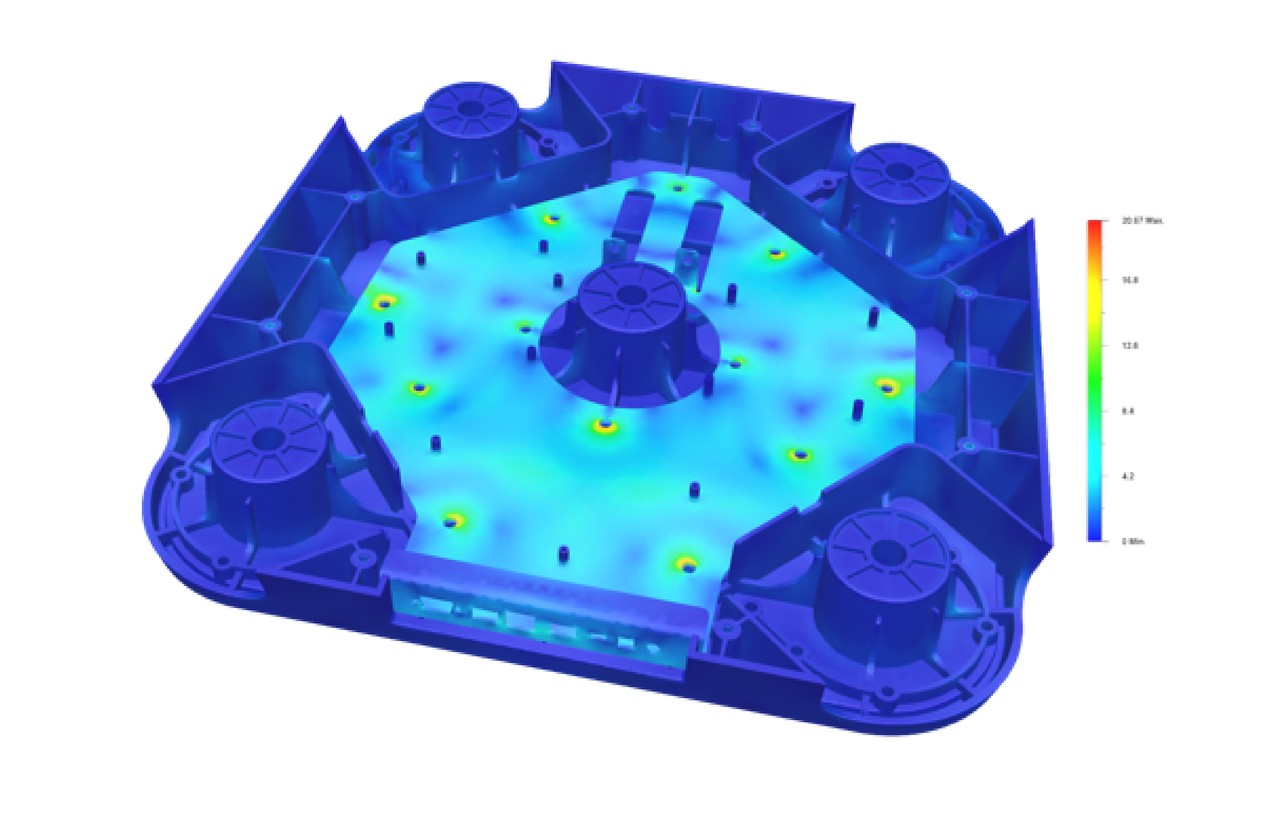 Stresses and deformations of the base housing with frames and inserts are calculated. The top cover is loaded to 2000 H. Stress testing have been conducted on the product. The developed architecture allows for a tenfold increase in load capacity (according to calculations in Autodesk Fusion 360).

The amount of work completed in terms of design, ergonomics, materials, strength, assimilability of the product and other aspects can be assessed and calculated at this stage, among other tasks. We changed the rotation axis of the cover on the mast and added magnets for extra fixation after assembling the sample. And after connecting the electronics and testing, we were certain that the design and parts were accurate enough to meet the scanning criteria. Finally, we evaluated the endurance and usefulness of focus group volunteers. 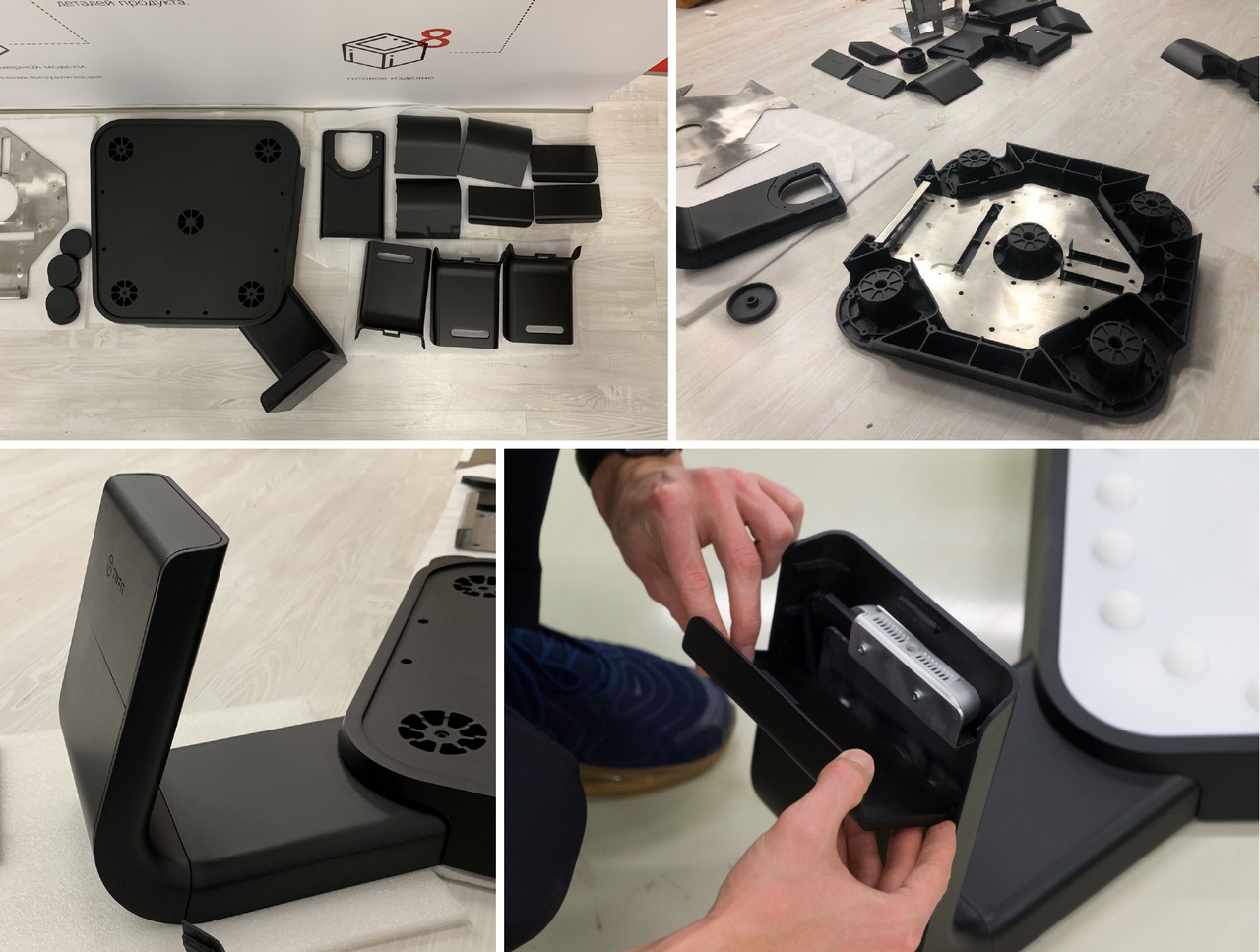 The device's final casing is finished in a white color scheme. 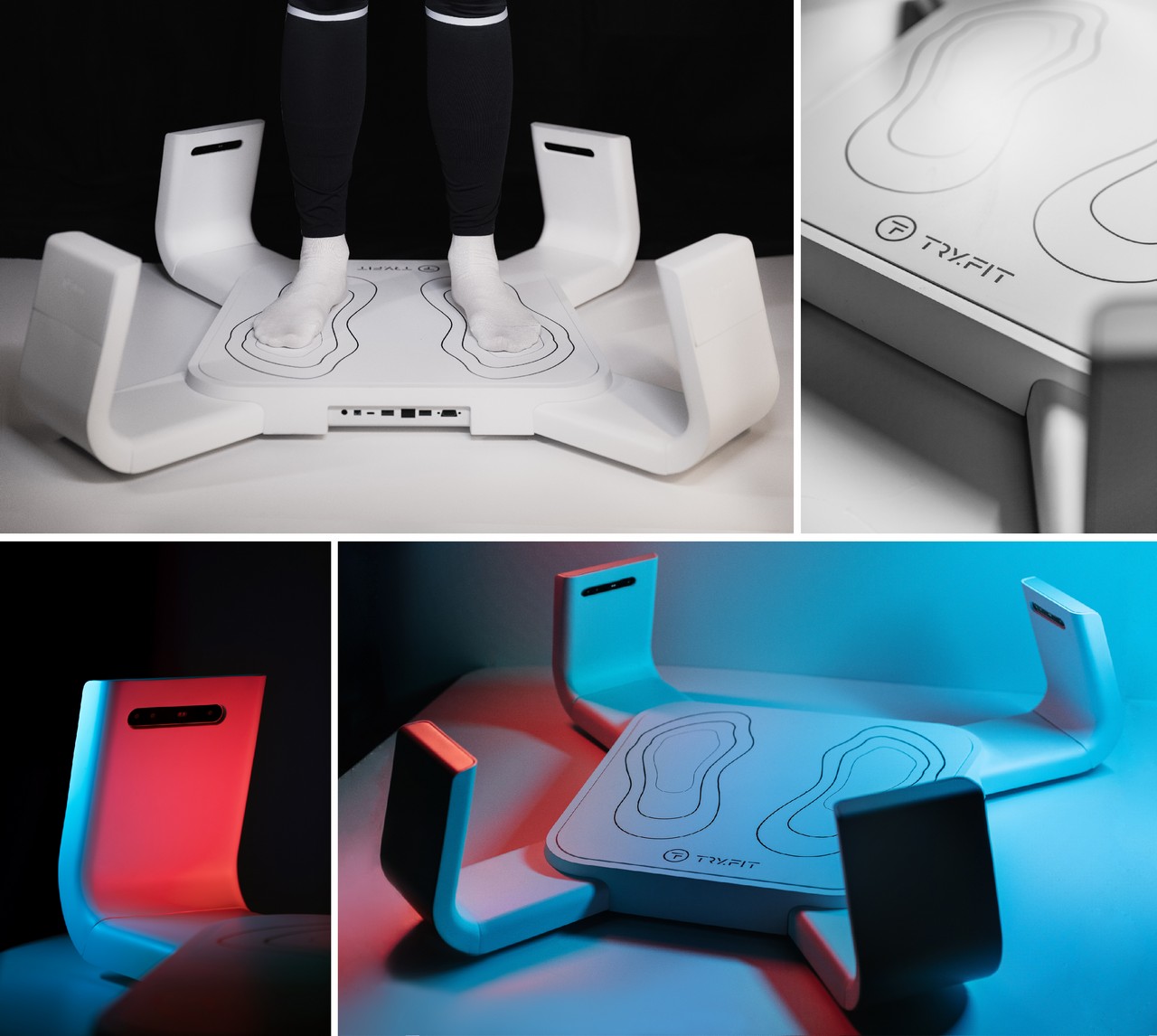 The TryFit scanner's new design has already had an effect on the client's company.

TryFit has licensed the scanner's manufacturing and sale in India, Bangladesh, and Sri Lanka.

TRY.FIT was declared a finalist for the iF Design Award 2021.

Yulia Neronova is the designer.

Vladimir Ternovykh was the design engineer.

Alexey Kutyaev is the art director. 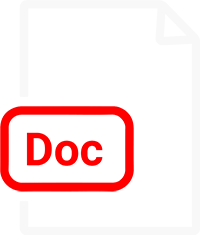 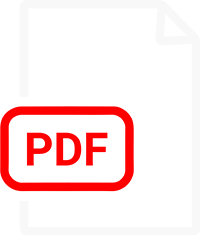